mtdoonmeister at gmail dot com
Posted by MTgunfighter at 6:26 PM No comments:

1. Do you swim in the winter?
If I fall in the water… I am not that into swimming in the summer; although my dogs are…
The last time I went swimming was after we had been camping for two weeks, in a tent, and we checked into a hotel in Kanab, UT, on the UT-AZ border. We were on our way to another week of tent camping at the North Rim of the Grand Canyon, so I took advantage of the pool...
2. Do you love or hate winter?
Love it! I am, generally, a big fan of seasons. I grew up where the only difference between winter and summer was overcast and about 10 degrees...
3. Do you put makeup/actual clothes on when you know you're going to be home all day with just family?
No make up. Just doesn’t do anything for me. The point to being at home full-time is lounging around in your ‘casual clothes.’
4. How old were you when you had your first alcoholic beverage?
I forget…
5. How many ill calls in a 12 month period do you think are acceptable?
If they give you sick days, they must mean for you to use them, right?
I used to feel conflicted about this, until I realized the people who were paying me on salary were, pretty much, exploiting that by trying to get me to work as much overtime - on a sixty hour week - as possible without compensation.
I took a few days to go skiing, too...
Posted by MTgunfighter at 4:07 PM 1 comment:


When I first started sweeping, I replied to a blog posting asking what was your  biggest complaint about sweeping (or a question somewhat similar)
My reply then was shipping.
It still is.
I live in a very small town - 500 people, 70 miles – over the continental divide – to the nearest town with a UPS/FEDEX store. The USPS doesn’t deliver mail to street addresses here; we all have to go to the post office to get our mail.
Because we don’t get mail delivered to our street addresses, when my street address is entered into a UPS/FEDEX shipping form, it comes back as being invalid. Somehow, despite this, most of the time, UPS/FEDEX gets delivered to my house.
Fortunately, I have a personal relationship with the UPS guy up here, (I slipped on some ice, hit my head and had a big laceration on it just as he was delivering a package when I first moved to my current address. He had to call an ambulance for me. Sort of a bonding experience.). So, I have had UPS deliver packages to me with a variety of addresses, including one addressed to my PO Box and another that had my name on it; my sister’s address, (3 hours away); and my zip code. The benefits of having a friend who works for UPS!
I don’t receive packages shipped by FEDEX as often as I do via UPS, and we don’t get the same FEDEX delivery person everyday here. So, I don’t have a personal relationship with the FEDEX delivery person. I am not hurting myself to get to know them better, either… LOL
Lately, I have been having an interesting delivery problem with FEDEX. A sponsor shipped a prize, transposing one digit of the zip code. It went to the local National Guard base. Then the sponsor re-sent it to the correct address and FEDEX returned it as undeliverable.
FEDEX said it might not have been delivered because of the 4 feet of snow we had last week. However, FEDEX delivered a package to the same address the sponsor shipped my prize to - in the middle of the snowstorm.  So that pretty much rules that out.
Today, I sent and the sponsor the address, again; a photo of the shipping label from the package I received Friday; and the address of the local hardware store  where they could also ship it to.
We shall see what happens.
Ever had delivery problems like these?
Posted by MTgunfighter at 12:09 PM No comments:

The first (major) snowfall of the winter

It's been snowing for about 40 hours straight.

I was busy spreading the 'news' about SOPA/PIPA today when I realized I needed to go out to the store, before they sold out of everything, (where I live is very isolated). So, I headed out the door to this: 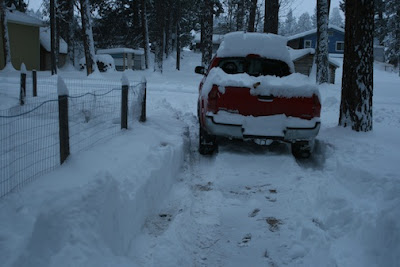 Well, actually, this is after I dug out. There was about 3 feet of snow on the windshield and the hood when I came out. I was standing in snow up to my knees trying to push the snow off my windshield and the roof of my truck. I had to clear the back window, which is rare, which was difficult because the back of the truck was full of snow, (that's rare, too).

Then I put it in 4WD and tried to get out of my driveway. That took about  10 minutes. By the time I got out, the eau de clutch was strong.

The snow plow had been by my house, once, in the last two days and the snow was still about a foot deep on the road.

Getting back into my driveway was even more difficult. When there is snow, I park at the end of my driveway so I can get out easier. Backing in was a pain - see that tree on the right side of the picture? No matter what I did, my pickup slid towards it. (It's beautiful tree, but I'd like to strangle the person who put it at the end of my driveway. LOL) Back and back and forth. Eau de clutch was getting stronger.

After about 15 minutes of back and forth, I finally got to were I wanted to be.

And all I got front the store was a box of frozen 'fried' chicken and a bag of frosted flakes...

Oh, and it is still snowing...

Posted by MTgunfighter at 5:55 PM No comments:

The Hitler screaming about SOPA video that has been making the rounds is a 'meme.' Hitler has screamed about a lot of things over the years - changes in Xbox Live, et cetera

Posted by MTgunfighter at 11:44 AM No comments:

A couple of things - maybe a little off the wall…


I hit 614,820 on Bejeweled. This is, obviously, a milestone event in my life. Right up there with my 100,000 game on Tetris.
Bejeweled is a battery hog. Current iPhone/iPod Touches seem to have about half as long a battery life as the first iPod Touch I used. Anyway, it complicated my 600,000+ game on Bejeweled. I had to stop at around 300,000 and recharge my iPod Touch. Fortunately, Bejeweled lets you do that. And I went on to the glorious, unknown heights of 600,000+...
Okay, so now you know what I did yesterday when it was snowing.
Gaming tips for Bejeweled:
All joking aside, I am glad iOS devices weren’t developed until after I retired. I never would have got anything done - supporting networks with one homogenous operating system and consistent applications is hard enough. It would be impossible to control what people downloaded on their iOS devices. Particularly the people that hired me. Trying to support hundreds of different apps and upgrades would have been living hell.
And, eventually, software for iOS devices will be able to pass malware from them to other computers on the network. Talk about a nightmare.
And I would have wasted my time playing with them.  I am a big procrastinator. Huge. iOS devices are a time sink. Even if you don’t use FaceBook on them.
Posted by MTgunfighter at 12:50 PM 30 comments: