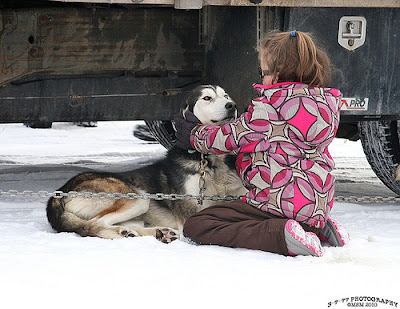 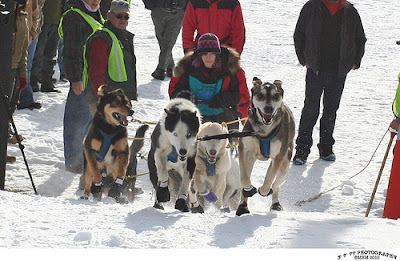 Out of the gate. The dogs are so eager to run, that once they get in the starting gate, the weight of an ATV is used to hold them back until it is their turn to start. 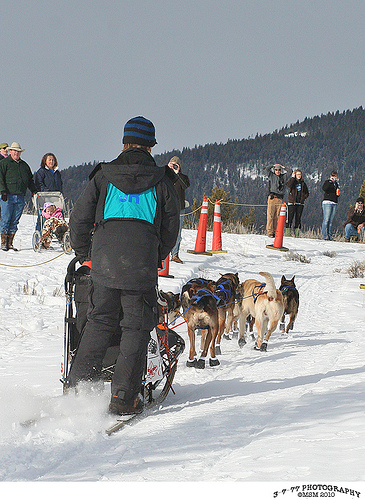 This is what they look like after they pass you. 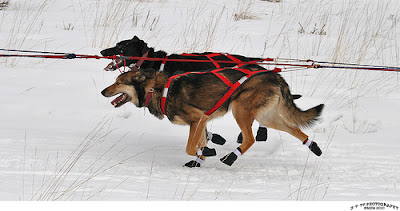 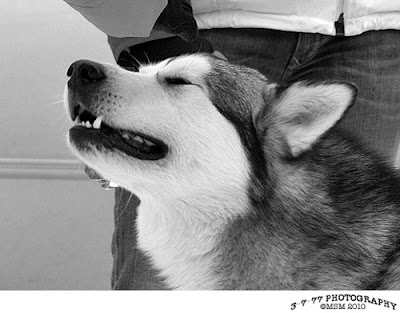 
For more Race to the Sky photographs click here...

All images ©3–7–77 Photography 2008-2011 Do not copy.
Some Common Misconceptions about sled dogs...
1) That Jack London's books - Call of the Wild - represent the real life of mushers.
London's stories are pure fantasies. They do not resemble real life in any way. The portrayal of how dogs are treated would be considered abuse.
2) That mushers beat or whip their dogs to make them perform.
They don't.
Sled dogs are athletes bred specifically to run. They run because they want to. No use of physical force would make them run faster.
All races have veterinarians in attendance; usually at the beginning and end of a race and all the race check points. If the vet doesn't think the dog can continue, the vet pulls the dog from the race. It is likely that a musher would have already pulled the dog from team and given them a ride in the sled to the next check point.
In the Iditirod, dogs that cannot continue are flown from the check points back to Anchorage. In Anchorage, they stay at  a fancy hotel until their owners reclaim them.
It is all about the dogs and their health and safety.
Any musher who hit his dogs would immediately be asked to leave.
3) That sled dogs are mean and will bite you.
They don't, (see image above).
Some dogs are high strung and do not want to be petted. I have never seen a sled dog growl at, or bite, a human.
It is considered a major social faux pa to pet a sled dog without first asking the owner's permission.
4) That sled dogs all are Huskies or similar breeds.
They aren't.
Sled dogs are bred to run and to retain the desirable characteristics from any one of several other breeds - including Irish Setters. Crossbreeds have 'hybrid vigor' which allows them to better do their jobs.
Most sled dogs look more like border collies than Huskies.
5) That mushers yell, "Mush," to get their dogs to run.
I don't know if mushers ever yelled "mush" to get their dogs started.  'Get-Get' is used to start the team.
"Whoa" is used when you want them to stop. "Yee" and "haw" are used to signal the dogs to turn.
6) Yes, Virginia, the Iditirod is the Last Great Race.
Posted by MTgunfighter at 9:30 AM